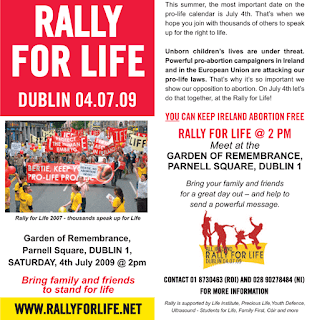 Following my post last week about the Rally for Life in Dublin – it is estimated that between 4,000 and 5,000 people took part in it. The organisers were very happy with the success of the day, and it is hoped that next year’s Rally for Life – planned to take place in Belfast – will give political leaders and legislators a clear message that they must respect life at every stage from fertilisation to natural death.

With regard to the Dublin Rally, it was noticeable that the major newspapers, together with RTÉ (the national television station) chose to ignore the event. However, the organisers were delighted with the coverage that the Rally received on internet sites worldwide. Thankfully, the mainstream media is no longer able to censor stories it doesn't like very much.

Never ones to rest for long, many of the young people involved with the Rally are now travelling around Ireland – from 8 to 18 July – on their annual Roadshow, bringing to towns and cities across the country the message that life must be respected.

More information, and plenty of photographs, can be found here.