The sun was shining on Belfast on Saturday last July 7th when several thousand pro-lifers walked through the streets of the city centre to the rally's assembly point at Custom House Square. There they listened to speakers from both sides of the border, as well as Britain and the US, call on them to continue the fight to keep Ireland free of abortion.

Bernadette Smyth of Precious Life said that this year’s rally was a celebration of the founding of Youth Defence (YD) in 1992. Despite this anniversary there was an even greater sense of urgency this year for obvious reasons. Dr Eoghan De Faoite of YD told the crowd that the Irish government was determined to use the faulty decision by the European Court of Human Rights (ECtHR) in the A B and C case as the pretext to liberalise the country's abortion laws. But, he pointed out, rulings by ECtHR, are not legally binding and under the Constitution it is the Irish people who hold sovereignty. 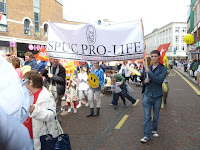 Unlike previous rallies in Belfast, this year a small number of anti-life protesters, between 100 and 200, gathered at one point along the route. Their attempts to disrupt the event, however, were frustrated and their pro-abortion slogans were drowned out by the chants of “Pro-life, pro-life”.
Initial estimates put the attendance at this years event at 7000 and in addition the event was well attended by members of the clergy, including Bishop Donal McKeown, auxiliary bishop of Down and Connor.
Bernadette Smyth also read out a message of support from the Holy Father Pope Benedict XVI.