The 48th UN Commission on Population and Development (CPD) ended on Friday April 18th with a firm rejection of the anti life and family policies the UN is attempting to impose globally.

The 48th session of the Commission, was themed, ‘Integrating population issues into sustainable development, including in the post-2015 development agenda’. This was the last Commission before the upcoming negotiations on a new 15 year programme to be known as the Sustainable Development Goals (SDG’s) and was regarded by UNFPA the UN population fund and their anti life allies, such as International Planned Parenthood (IPPF), as their best opportunity to influence the outcome of the SDG’s by forcing the acceptance of controversial language on sexual and reproductive rights and comprehensive sexuality education.

In recent years the negotiating strategy adopted by Western governments has been to insert controversial issues into documents during the negotiating period and rely on the chair to issue a compromise text which inevitably retains some of those issues.
In this case negotiations on the outcome document over a period of 10 days were similarly loaded up with controversial language and by Thursday evening (April 16th) had become completely unacceptable. Negotiations continued on Friday when a so called compromise text was produced by the chair Ms. Bénédicte Frankinet from Belgium.  The Chair had removed a reference ‘sexual rights’ from the text but it still contained a number of unacceptable references.

Ms. Frankinet made it clear that her so called compromise text was final and demanded that the text be accepted without alteration as a consensus document. The Nigerian Ambassador Usman Sarki speaking on behalf of the African Group informed the meeting that the text needed further work and that in his opinion agreement could be reached in 10-15 minutes given the political will to do so. The chair was  unwilling to accommodate the concerns of the African countries regarding terminology such as ‘comprehensive sexuality education’ (CSE) and reproductive rights. Rather than qualify or delete the controversial terms the Chair withdrew the document.

The decision by the chair to withdraw the document was greeted with a shocked silence by the anti-life and family brigade, when the realisation sunk in that there would not now be any outcome document and that there was no agreement on how to integrate population policies in the post-2015 development agenda, the actual purpose of this year’s commission. 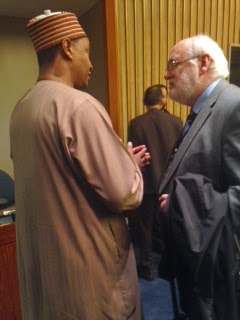 Ambassador Sarki, who had diplomatically tried to persuade the Chair to be more accommodating when he sought time to discuss proposed changes spoke very forcibly following the withdrawal of the document. “We came to the meeting with an open mind,” he said, adding that from the outset they had to deal with drafts “replete with controversial issues that have in the past not only proved difficult to deal with but are also extremely divisive in nature.” He put down a marker for future negotiations saying that member state delegations and UN officials “should refrain from putting language in drafts on which there is no consensus”.  He also said that lack of an outcome document should not be seen as a failure. “Member states”, he said, “have resisted the imposition of unhelpful ideas and concepts on all the membership.”

Mr.Babatunde Osotimehin, head of the UN Population Fund (UNFPA) told the meeting, in an obviously crestfallen manner, that he “regretted” that an agreement could not be reached and then went on to criticise countries for not being “tolerant,” because of their resistance to the UNFPA agenda.

The delegate from Nauru, Rennier Gadabe, complained about UNFPA harrassment of his Government during the negotiations “Does UNFPA he said, think they can do this because Nauru is the smallest member state?” UNFPA had pressured the Nauru Government to change its position on reproductive rights and CSE and was critical of the position taken by the Nauru UN delegation. The delegate angrily told the meeting that such tactics were “unacceptable.”

UNFPA has over the last few years spent hundreds of thousands of dollars arranging conferences throughout the world, in places like, Accra, Kuala Lumpur, Ocho Rios, Montevideo and other venues, with the sole purpose of firstly influencing the outcome of this session of the Commission and ultimately the Sustainable Development Goals.

Mass in Knock for the protection of the sanctity of marriage, family and life and for Ireland

Mass for Ireland - The Lamb Will Conquer - in Knock Basilica, Sat 25th April at 3 pm for protection of the sanctity of marriage, family and life and for Ireland.

Stations and rosaries from 2 pm. Celebrant Fr John Mockler with fellow priests. Prayer groups and banners welcome. Please come and unite in prayer for Ireland at this crucial time. If you are coming to the mass on Sat, please stay over / come back for day of Eucharistic Adoration on Sunday.

Notice is short, however, this was the only date available.

So far buses are running from the Dioceses of:
Cashel and Emly,
Cork and Ross,
Clogher,
Cloyne (overnight bus),
Down and Connor,
Galway (free bus)
Kerry,
Limerick.