Appeal to uphold and cherish the 8th Amendment: with video link
European Life Network calls on the Citizens’ Assembly to uphold the 8th Amendment and reject all attempts to legalise the killing of unborn children. In support of this appeal, we have prepared a video presentation (produced in partnership with the Society for the Protection of Unborn Children) featuring Irish people, and people of Irish descent, with specialised knowledge and personal experience of these issues. We ask the Assembly to view this video, available here:
https://www.spuc.org.uk/news/videos/new/2016/november/act-now-protect-ireland-pro-life-8th-amendment

Despite false claims, the 8th Amendment simply recognises that unborn babies have a right to life equal to that of their mothers. Ireland’s maternal health record, among the best in the world, also reflects the fact that Irish doctors are trained to treat a mother and her unborn child as two equal patients. 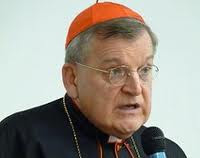 In this presentation, Raymond Cardinal Burke argues that a clause similar to the 8th Amendment should be in the constitution of every nation. He notes the dedication of Ireland’s Constitution to “the Name of the Most Holy Trinity, from Whom, is all authority and to Whom, as our final end, all actions both of men and States must be referred”. Through this dedication, Ireland provides a great example of a correctly ordered society.

Dr Patrick Fagan (Director of Marriage and Religion Research Institute) argues that when a nation starts to eliminate pain and suffering by eliminating people, there is no logical place to draw a line. Even limited relaxation of abortion law leads inevitably to widespread abortion. In the UK, the Abortion Act 1967, was not intended to introduce abortion on demand. Fifty years on, more than 8.4 million babies have been aborted. 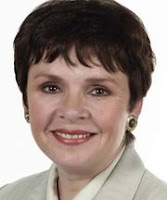 Evidence shows that abortion is physically and psychologically damaging, no matter where it takes place. Bernadette Goulding (Director of Rachel’s Vineyard, Ireland) who had an abortion herself, describes the trauma millions of women around the world have experienced following abortion.

Kathy Sinnott contrasts the terminal decline of European states as a result of low birthrates with the situation in Ireland. The repeal of the 8th Amendment would propel Ireland towards a similar demographic collapse. She also argues that seeking to dispose of children with life-limiting conditions or serious disabilities is modern day eugenics.

Rebecca Kiessling, who was conceived in a violent rape, challenges the inherent injustice of punishing innocent babies for the crimes of their biological fathers.

Cliona Johnson tells the heart-rending story of her son John Paul who lived 17 minutes after birth. Their story offers a truthful and inspiring account of authentic compassion for the most vulnerable of all – unborn babies deemed “incompatible with life”.

Finally, the video calls on the Irish diaspora to speak out now and to encourage the nation to maintain its pro-life culture that is identified and admired worldwide. 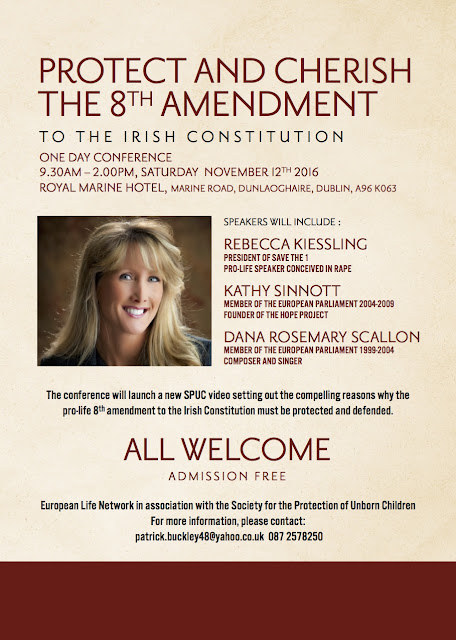 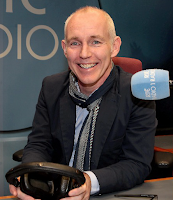 BLOG POST  by Marie Cummins
When will RTE adhere to the broadcasting laws of fairness and impartiality when dealing with the issue of abortion? Over the past six months, Ray D’Arcy, who presents an afternoon radio show for RTE, has twice been found to be in breach of the Broadcasting Authority if Ireland (BAI) standards in dealing with the issue of abortion and the right to life of unborn babies.

The BAI decisions were handed down following a number of complaints by members of the public that D’Arcy’s handling of abortion was one-sided and biased. See articles in the Journal and the Irish Independent.

The first case arose during a programme on June 9th last year when D’Arcy interviewed Amnesty International’s Colm O’Gorman, in relation to the group’s pro-abortion report ‘She is not a criminal: The impact of Ireland’s abortion law’.  Following that interview  six complaints were lodged with the BAI on the basis that the programme was clearly in breach of Section 39 (1) of the Broadcasting Act 2009, which stipulates that ‘all news broadcast is reported and presented in an objective and impartial manner and without any expression of the broadcaster's own views’.

Recently another complaint was issued to the BAI following D’Arcy’s interview of creator of Father Ted, Graham Linehan and his wife Helen, on 19 October of last year, regarding their experience of abortion. The interview focused on the fact that at 12 weeks gestation their baby had been diagnosed as having a so called ‘fatal foetal abnormality’ and on their subsequent decision to have an abortion. The Linehans who were living in England at the time took part in an Amnesty International video, the purpose of which was to remove all remaining barriers to, and decriminalise abortion, in Ireland. The BAI upheld both complaints in separate rulings and ruled that the radio programmes did not meet the requirements for ‘fairness, impartiality and objectivity'.

Both programmes were blatant attacks on Ireland's pro-life laws and in particular on the Eight Amendment of the Constitution, which grants an equal right to life to a mother and her unborn child. These programmes were presented by D’Arcy during a period when the pro-abortion lobby is working hard to overturn Ireland’s protection of the unborn and he failed to provide balance by inviting someone to present a pro-life view, neither did he adequately challenge the position of the guests on the show. On the contrary he seemed to be in agreement with them and gave them a very soft interview.

The whole affair raises a number of poignant questions . First, why were there no balancing views during the programmes, there are a number of groups such as ‘one day more’ whose members have experienced similar heartbreak as the Linehans but carried their babies to term?
Another critical question relates to the interview with the Linehans and we ask, if pro -life people came on the air, would they be given the same soft approach?
Probably not.

The Irish media in general appears to have embraced pro-abortion stance and seem to waste no opportunity in promoting their views. The position of RTE however is somewhat different to the media in general, in that they receive public funding and it is incumbent on them therefore to be more careful about the presentation of one-sided views on critical issues such as this.
It is high time that RTE are taken to task about their broadcasting policies and their monitoring of individual programmes when dealing with the issue of abortion if they are to continue to receive public funding.

It is also clear that the time has come for RTE to take action in regard to Ray D’Arcy.

Blatant bias against pro-life and pro-family NGO’s at UN Commission on the Status of Women (CSW60).

Two amendments to the Criminal Justice Bill seeking the introduction of abortion now look unlikely to pass as the DUP say they will vote against it.
The Democratic Unionist Party (DUP) has however asked the Northern Ireland Health Minister to set up a working group to look at how the issue of so called ‘fatal foetal abnormality’ can be addressed.
Two separate amendments to the Northern Ireland Criminal Justice Bill, tabled by  the Alliance and the Green Parties, aimed at changing the law on abortion will come to a vote today Wednesday February 10th, The amendments if approved would allow abortion of babies with life-limiting disabilities and babies conceived by criminal acts (rape or incest).
Both the Society for the Protection of Unborn Children and Precious Life appealed to MLA’s to reject the proposals. These are the most vulnerable of unborn children and if their legal protection is denied, the legal protection of all unborn children is brought into question.

Northern Ireland’s Catholic Bishops have also urged Assembly members to reject the proposed amendments. The Bishops in their statement rephrased the issue to refer to unborn children with life-limiting conditions, rather than the pro-abortion definition of ‘fatal foetal abnormality’.

The DUP has asked the Northern Ireland health minister to set up a working group to look at how the issue of fatal foetal abnormality can be addressed.
The move comes as MLAs prepare for an assembly debate on whether to make abortions legal in such cases. The DUP said the issue required proper consideration by the assembly and executive, and that the Bill was not intended for this purpose. They have asked Health Minister Simon Hamilton to set up a working group, including clinicians and people with a legal background, to make recommendations as to how the issue can be addressed, including, if necessary, draft legislation. It is to report within six months.

The proposed amendment looks unlikely to pass now that the DUP has said it will be voting against it.

The killing of unborn babies has been sanitized by the abortion industry and its supporters by telling us that it is a legitimate 'Choice' and that if it not legalized women will die, They claim that legalizing abortion makes it safe but nothing could be further from the truth.


Legalized abortion is widely touted by them as being beneficial to women, but a wealth of medical and psychological evidence suggests otherwise.

Women face numerous risks with abortion, legal or illegal, and those risks are substantially greater in the developing world, yet some in the international community for ideological reasons have focused their resources primarily on legalizing abortion at the expense of women’s lives and health.

The claim is, that making abortion legal makes it safe, but medical research shows this to be false, the evidence is overwhelming, abortion is dangerous for women. It is by its very nature a violent and damaging procedure. Documented complications include hemorrhage, infection, cervical damage, uterine perforation, pelvic disease and retained fetal or placental tissue.

Abortion is also associated with increased risk of negative psycho-social consequences. For example, a 2011 meta-analysis published in the British Journal of Psychiatry[4] found an 81 percent increased risk of mental health problems. Anxiety, depression, alcohol and drug use and suicidal behaviors have been found to increase following abortion, along with damage to key relationships.

Abortion needlessly puts women at serious risk, both physically and psychologically and rather than legalize or promote it, governments should protect the equal dignity and basic rights of all human beings, including women and their unborn children.
[1] http://www.ncbi.nlm.nih.gov/pubmed/9292639