Just one week after the EU rejected the controversial Estrela report another equally controversial draft report, the ‘Roadmap against homophobia and discrimination on grounds of sexual orientation and gender identity’ otherwise known as the Lunacek report, was adopted today by the Committee on Civil Liberties, Justice and Home Affairs, by 40 votes to 2 with 6 abstentions.
It is understood that today’s report follows a number of previous demands made to the European Parliament over a three year period, to roll out a so called ‘equality strategy’ for LGBT people similar to the strategies that already exist for Roma integration, gender equality and discrimination. 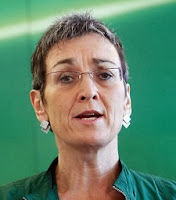 The draft report, which was adopted today by the Committee was prepared by Austrian MEP Ulrike Lunacek. The report calls on the commission to make proposals for the areas of employment, education, health and access to goods and services.

It is expected that the report will come before the Parliament in plenary in February however it is still possible that it may be included in the January session.