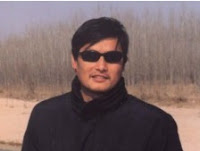 According to a BBC report Chen Guangcheng the blind activist Lawyer jailed after revealing rights abuses under China's one-child policy has been freed after a four-year prison term.

We reported in February 2009 on the case of Chen who had been imprisoned on spurious grounds for exposing thousands of atrocities which included forced abortions and sterilizations in the Shandong province under the infamous Chinese One Child Policy.

At the time of our 2009 report, Chen had been denied early release on medical grounds and in addition had been denied visits from his wife. It was also reported that he had been subjected to severe beatings whilst in gaol. Chen at that time had been ill for a number of months but pleas for early release so that he could access appropriate medical treatment were ignored by the authorities.

It has been rumoured that Chen may be a contender for this year's Nobel Peace Prize.