The current real and substantial threat to unborn babies in Ireland 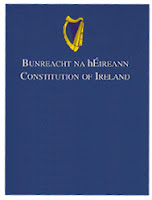 New threat to the unborn in Ireland
Unborn babies are once again under serious threat in the Republic of Ireland.  A new attempt to legalize abortion in Ireland flows from the decision of the European Court of Human Rights (ECtHR) in the A, B and C case.  Ironically the Court ruled that it has no competence to create a new so-called right to abortion, while at the same time ruling that an 'existing Constitutional right to an abortion' had not been implemented in Ireland. This Court has shown in previous rulings that it supports abortion. The Council of Europe, which governs the Court, has also attempted to pressurize Ireland into legalizing abortion.
Constitutional Protection of the unborn.
The constitutional protection of the unborn in Article 40.3.3 was weakened by the Supreme Court decision in the infamous 'X' Case. Pro-life organizations together with many lawyers, including some who are pro-abortion, believe that the “X Case” decision represents a flawed interpretation of article 40.3.3 and  can only be described as a complete travesty of justice that defies logic. Nevertheless pro- abortionists have been using this judgment to try to persuade successive Irish Governments to legalize abortion.
The European Court of Human Rights confused legitimate medical treatment with abortion.
It is untrue for the ECtHR to claim that pregnant women with cancer can't be treated in Ireland. What the court failed to recognize was that medical treatment for cancer, which may cause unintentional harm to the unborn baby is not, and does not lead to a direct abortion. This treatment is therefore fully accessible to all Irish women.
“Expert Group”
The Government has now appointed a group of “experts” to consider the current law in Ireland following the decision of the European Court of Human Rights in the A, B and C case. The expert committee of fourteen members is to advise the Government on the European Court ruling on the ABC case, a case which was sponsored by the international abortion lobby with the intention of undermining Ireland's abortion laws.  At least four members of the group have been linked to abortion advocacy and/or to a drive to legalize embryo research in Ireland.
The European Convention for the Protection of Human Rights and Fundamental Freedoms cannot be used to weaken protections afforded to human life guaranteed by a Member State.
·      Abortion is never medically necessary.
·      Expert testimony has already been given to a Government committee on this issue, where leading Irish experts confirmed that interventions for conditions such as ectopic pregnancy and cancer were not considered as direct abortions since the intention was never to harm the child.
·      The European Court ruling places Ireland under no obligation to legalize abortion. The Irish Constitution confirms that it is the people, being sovereign, who decide such matters.
·      According to the World Health Organisation, Ireland, without recourse to abortion, is one of the safest place in the world for a mother to have a baby. The expert group should also recognize the overwhelming scientific evidence - which shows that abortion produces negative mental outcomes for women. New Zealand Study: The British Journal of Psychiatry (2008) 193, 455–460. doi: 10.1192/bjp.bp.108.055079
·      Far from violating human rights, Ireland's pro-life ethos upholds and respects the human rights of both mother and child.
Please CALL: Taoiseach, Enda Kenny, TODAY, asking him to ensure that the expert group upholds our ban on abortion. Call him on (01) 6764048 or (094) 9025600
Also CALLHealth Minister, James Reilly, TODAY, Call him on (01) 6711026 or  (01) 8901300
CONTACT your local TDs.  Distribute copies of this leaflet in your area.
For further information contact:
Patrick Buckley e-mail:patrick.buckley48@yahoo.co.uk Telephone:01 2847136 Mobile:087 2578250