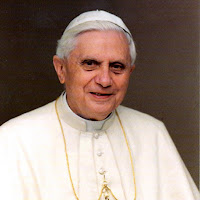 The Pope meeting with members of the Pontifical Academy for Life urged infertile couples to shun IVF and insisted that sex between a husband and wife was the only acceptable way of conceiving.
Pope Benedict XVI said artificial methods of getting pregnant were simply 'arrogance' as he spoke at the end of the Academy's three-day conference on infertility in Rome. See Daily Mail report
He told scientists and fertility experts that matrimony was the 'only place worthy of the call to existence of a new human being'.
The Pope reiterated the Church's stance against artificial procreation, telling infertile couples they should refrain from trying to conceive through any method other than conjugal relations.
'The human and Christian dignity of procreation, in fact, doesn't consist in a "product", but in its link to the conjugal act, an expression of the love of the spouses of their union, not only biological but also spiritual,' Benedict said.
He told the specialists in his audience to resist 'the fascination of the technology of artificial fertility', warning against 'easy income, or even worse, the arrogance of taking the place of the Creator'.
He suggested that this was the attitude that underlies the field of artificial procreation.
Sperm or egg donation and methods such as in vitro fertilization are banned for members of the Catholic church.
The emphasis on science and 'the logic of profit seem today to dominate the field of infertility and human procreation', the Pope said.
But he added that the Church encourages medical research into infertility