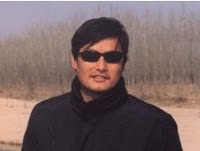 According to a report from China Aid, Chen Guangcheng the blind activist Lawyer jailed after revealing human rights abuses under China's one-child policy, freed last year after a four-year prison term is under house arrest and still suffering ongoing persecution.

We reported in February 2009 and Sept 2010 on the case of Chen who had been imprisoned on spurious grounds for exposing thousands of atrocities which included forced abortions and sterilizations in the Shandong province under the infamous Chinese One Child Policy.

At the time of our 2009 report, Chen had been denied early release on medical grounds and in addition had been denied visits from his wife. It was also reported that he had been subjected to severe beatings whilst in gaol. Chen at that time had been ill for a number of months but pleas for early release so that he could access appropriate medical treatment were ignored by the authorities.
ChinaAid have released an exclusive video showing the persecution Chen and his family are suffering at the hands of the Chinese government, which has put him under illegal house arrest since his release from prison.
The hour-long video shows that "Mr. Chen is living in miserable conditions, cut off from all outside contact, and detained illegally in his home," Fu said. In the video, Chen describes being monitored daily by three shifts of agents with each shift consisting of 22 people.

The video was taken recently at Chen's farm home in coastal Shandong province and was provided to ChinaAid by a reliable government source who is sympathetic to Chen's cause and outraged by the treatment of Chen. He has requested anonymity for his protection.
In the video, Chen and his wife Yuan Weijing, as well as their son Chen Kesi, appeal to the Chinese people and the international community to work together for a more equal China where there is justice and the rule of law. They also vow to continue their fight despite the extreme hardship and continuous brutal treatment by the Chinese regime even after Chen's release from unjust imprisonment.