In a week that saw the publication of an opinion poll that recorded 68% support for the right to life of the unborn and the coming together of the various strands of the pro-life movement on an all Ireland basis the political parties were once again under pressure to clarify their positions on the right to life of the unborn.
The Labour party at the outset of this campaign made abortion an election issue and the response of the pro-life movement was strong and unequivocal forcing Fine Gael the party expected to lead the next government to further elaborate their position on abortion which they set out as follows
Fine Gael is opposed to the legalisation of abortion. 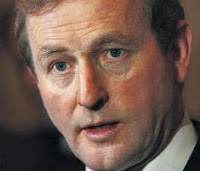 Fine Gael will establish an all-party Oireachtas Committee, with access to medical and legal expertise, to consider the implications to the recent ruling of the European Court of Human Rights and to make recommendations. Such a process would, we believe, be the best way of examining the issues in a way that respects the range of sincerely-held views on this matter.
Fine Gael’s representatives will bring to the proposed all-party committee a clear commitment that women in pregnancy will receive whatever treatments are necessary to safeguard their lives, and that the duty of care to preserve the life of the baby will also be upheld.
Fine Gael is opposed to research conducted on human embryos, and favours alternative stem cell research that does not involve human embryos such as adult stem cell and umbilical cord research.
Fine Gael Campaign 2011
Picture shows Fine Gael leader Enda Kenny
The Fine Gael response has actually improved since their earlier statement however, some serious concerns still remain. There appears to be confusion in their statements between abortion and legitimate medical treatment. It is also easy to say that one is against legalisation of abortion  - that is not the same thing as a commitment that Fine Gael in Government will not legislate for abortion. In addition if Fine Gael is genuinely opposed to the introduction of abortion the question must be asked why do they need an all-party committee? Politicians choose their words very carefully and there is as yet no firm commitment that they will not legislate for the introduction of abortion should the proposed all party committee make such a recommendation.
Neither have Fine Gael said what their position will be in the event that they do not have an overall majority and enter into a coalition with the pro abortion Labour Party
We particularly welcome FG's opposition to embryonic stem cell research.
We must point out however that Fine Gael's record on the life issue is very mixed. Micheal Noonan introduced abortion referral. Several high-profile Fine Gael members have very publicly supported the legalisation of abortion in Ireland and Fine Gael MEPs have previously voted to use Irish taxpayers monies to fund embryonic stem cell research.
We urgently need honest unambiguous replies from Fine Gael and the other party leaders that in Government they will protect unborn life absolutely beginning from the moment of fertilization until natural death.
The most satisfactory way in which all party leaders could demonstrate their commitment to unborn vulnerable life would be to sign the ELECTION PLEDGE prepared by Ireland United for Life