The prestigious International Protect Life award for 2011 was awarded to Chile for the excellent work it has done in reducing maternal mortality levels whilst at the same time ensuring the right to life of unborn babies is protected. The award was presented to the Chilean Ambassador at their UN mission in New York

Daniel Ziedler, the committee's coordinator, said that Ambassador Octavio Errazuriz was extremely pleased at the award. The ambassador repeated Chile's committment to the protection of both mothers and unborn children. 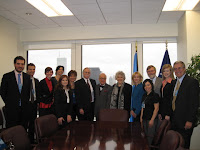 European Life Network ELN was among a group of over 30 NGO's active at the United Nations which praised Chile for having the lowest maternal mortality rate in all of Latin America.  In a communication to President Piñera announcing the group’s decision to designate its International Protect Life Award to the people of Chile, the leaders celebrated the fact that more Chilean women have safely delivered their babies than ever before.
Photograph shows some of the NGO representatives with the Chilean Ambassador to the UN in New York.
An example of how the right to life of the unborn is cherished in Chile is depicted in various video's such as can be seen on the following link Viva Chile
The committee announced the award on Friday Feb 25 at the UN during the meeting of the UN Commission on the Status of Women, and emphasized the importance the UN places on reducing maternal mortality within the UN Millennium Development Goals.
The leaders also referenced the ways Chile through its constitution and other programs provided for care and protection of the child before birth.  Specifically mentioned was that the “Chile Crece Contigo” (“Chile Grows with You”) program begun by former Chilean president Michelle Bachelet and meant to advocate for the well-being and protection of young children, has always included strong awareness that the unborn child is a member of the family. Also mentioned by the NGO leaders was the new “Comprometidos por la Vida” (“Committed to Life”) program announced by President Piñera to offer assistance to pregnant women in difficult circumstances in order to carry their babies to term.
“Improving women’s health and respecting human life are key elements for all countries who wish to achieve real development,” according to Julia Cardenal of El Salvador, one of the signers of the letter to President Piñera.