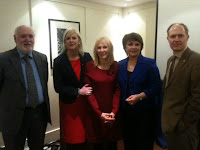 As a direct result of the grave new threats to unborn  babies in Ireland in the wake of the recent European Court decision on the A,B and C case, an all Ireland group over thirty pro-life organisations came together with former MEP's Kathy Sinnott and Dana Rosemary Scallon to proclaim and defend the absolute right to life of the unborn. The group challenged Eamonn Gilmore's and the Labour party support for abortion and demanded that all the main party leaders sign a pledge that they will in Government uphold the right to life from conception to natural death. They also demanded that the existing Irish Constitution be protected, despite the fact that Labour and some of the other parties wish to write a new constitution. The new umbrella group Ireland United for life issued the following press release.
pictured at the press reception (from left Patrick Buckley ELN, Bernie Smith Precious Life, Kathy Sinnott, Dana Rosemary Scallon, Liam Gibsonn SPUC Northern Ireland

Ireland United for Life, an alliance of over thirty cross community groups together with Dana Rosemary Scallon and Kathy Sinnott,  is calling on the political parties to clarify their respective positions on legislation for abortion arising from the recent judgment of the European Court of Human Rights. The Constitutional right of the Irish people to decide on Ireland’s unique pro-life status must not be usurped by the opinion of unelected judges from the European Court of Human Rights (ECHR), who neither respect nor represent the consistently-stated views of the Irish people with regard to abortion.[1]

No Irish political party has the right to legislate for abortion.[2]
Eamon Gilmore T.D. has made abortion a vital election issue, by stating that the Labour Party, if it forms part of the next government, will push for legislation to introduce abortion.[3]
Fine Gael does not want to make this subject an election issue and is evading the question but has stated that they will, “establish an all party committee to consider the implications of the ECHR ruling, to make recommendations respecting the range of sincerely held  views on the matter”. The electorate needs to know whether Fine Gael will move to introduce legislation for abortion, or concede to a coalition partner that is pushing for legislation facilitating it.
To date, Fianna Fáil, the Green Party and Sinn Féin have said little on the issue. The people have a right to know whether a political party intends to legislate for abortion. No party leader should hide behind consensus or all-party committees.
The majority of voters in Ireland are pro-life and in light of the urgent need for clarification on this crucial election issue, Ireland United for Life would like to state the following:
·       Ireland without abortion is one of the safest countries in the world for pregnant women. [4]
·       Ireland already makes provisions for medical interventions to save the life of a mother that sometimes, unfortunately, can result in the death of a preborn child.
·       Although we support medical intervention to save the life of the mother, the direct and intentional killing of the unborn is never medically or morally justified.
·       Every human life is worthy of protection, that protection starting at fertilization[5] and ending in natural death. We oppose all attacks on innocent human life, whether through abortion, euthanasia or on the pre-implanted embryo.
·       The imposition of legislation on abortion would exclude the Constitutional right of the Irish people to have their rightful say, undoubtedly would undermine the integrity of our Irish democratic process and would reduce further public confidence in our political system.
·       The leaders of the four main parties in Northern Ireland (Sinn Féin, UUP, SDLP, DUP) signed a document opposing the imposition of legislation on abortion in the North. [6]  Following this example, we call on the leaders of all political parties contesting the upcoming General Election in the Republic of Ireland to publicly pledge that they will not legislate for abortion and will support laws that protect the human embryo.
To conclude, we can and will only vote for parties and individual candidates who publicly pledge commitment to defend human life at all stages and we urge all concerned voters to do likewise.