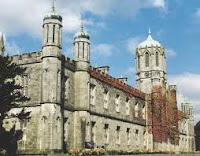 The Law Society of National University of Ireland, Galway (NUIG) has arranged a debate on the recent decision of European Court of Human Rights on the A,B and C case. The focus of the debate, which will take place on February 16th at 8pm, is the current Irish anti-abortion laws
The debate organizers say they are adamant that every side to this issue must be represented and are interested in discussing the implications of the ruling on Irish legislation.
The motion up for debate is "Abortion: Is it time Ireland followed Europe into the 21st Century?"
The aim of the Law Society according to the organisers is to promote the discussion of topics of legal, political and general interest. Previous speakers at NUIG include US Supreme Court Justices Antonin Scalia and Ruth Bader Ginsburg, Nobel Peace Prize winner Elie Wiesel and the Attorney General of Ireland, Mr. Paul Gallagher.